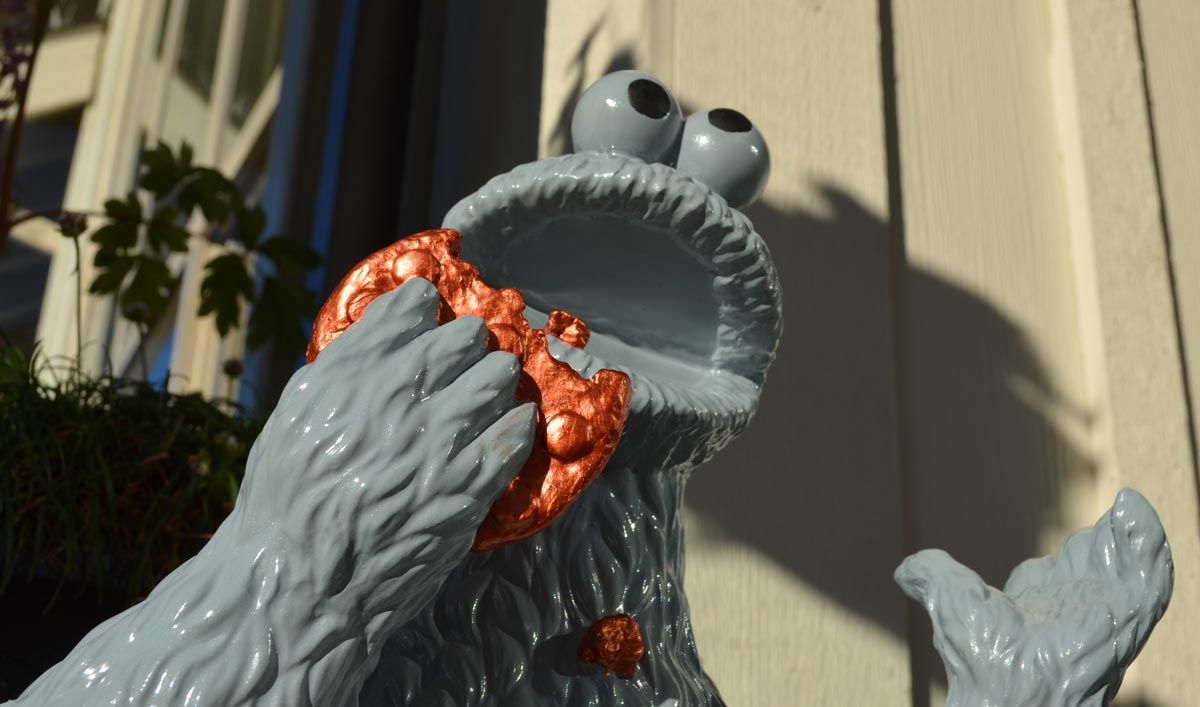 A brief backstory on this project. My late stepmother was something of a tchotchke acquirer. Not a collector, there was no theme, but an acquirer of random cutesy impulse purchases acquired over the years which slowly festooned the interior and exterior of the house I grew up in. One of these was a plaster Cookie Monster garden statue.

After my stepmother’s passing, my Dad spent some time creating a lovely  garden surrounding a koi pond. Most of the now faded, cracked and broken garden ornamentation ended up behind the shed, he was never a fan. Fast forward a few years and I found poor Cookie in amongst the tchotchke graveyard when I was looking after my Dad’s place while he was out of town. Being the trouble maker that I am, Cookie was placed on a slate slab bridge that sat over the little stream that lead to his koi pond in the backyard. And there he stayed as a bit of a joke, until the housewarming. 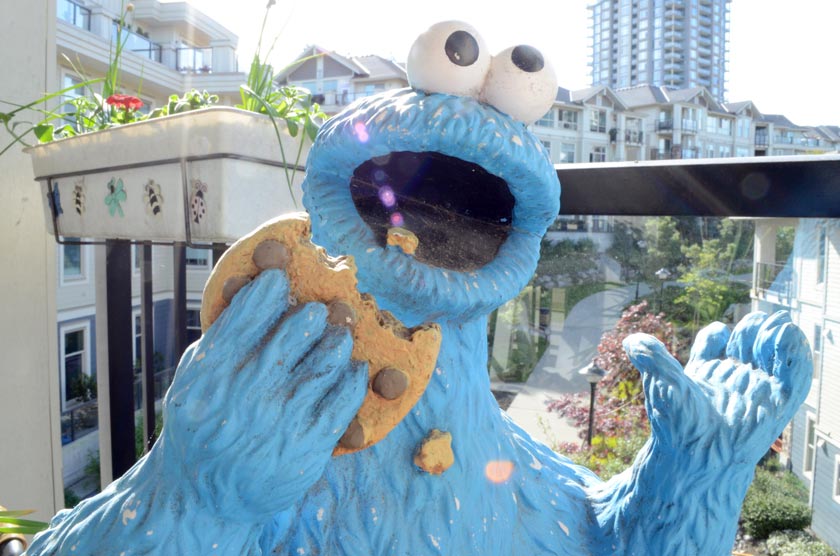 My dad, mentor to my sense of humour, smuggled him into the housewarming party Nina and I threw in our new condo. He was placed on our sunny little balcony, dutifully taunting the hummingbirds and bees with his faded cookie. But this is Cookie Monster: the myth, the Muppet, the legend. He deserves better. He deserves to be memorialized like the pop culture god that he is. It was time to give Cookie Monster his due and give him a greek statue makeover.

He was in pretty rough shape. Faded, filthy and a few holes in one foot meant he needed a scrubbing and some patching before I could even think or immortalizing him. So into the sink he went and after a thorough scrubbing with soap and water I had a clean Cookie Monster and a sink full of brown water.

Next up was a little reconstructive surgery on his toe. He’s made of plaster, so I whipped up a small batch of Plaster of Paris and stuffed the hole in his toe with a small wad of paper towel to act as a plug/base. I poured liquidy plaster through 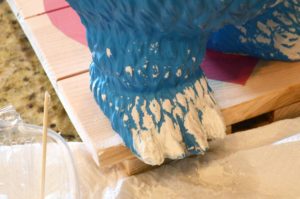 the hole onto the paper towel to let it soak in, then let the remainder gel up so it would be easier to sculpt. It took a few coats of plaster with some active sculpting as it set but I ended up with a pretty decent match! After it dried out I refined the shape with an X-ACTO blade and he was ready to paint.

Given the current state of condo living, spray painting anything without protection is dangerous. Luckily a large cardboard box was available to make an impromptu spray booth. (I didn’t seal the box though so the crappy old deck chair it’s sitting on got some new detailing from the gaps in the box. Live and learn.)

It took four sessions with the grey to get the job done. A straight on to start, then the backside followed by each side. The depth of his fur protected the sides from the front and rear sprays and I had to find some creative angles to get all of the nooks and crannies. Cookie Monster is a complex monster.

After the paint had dried, he was looking pretty good for a faux marble statue. But the grey was only half the plan. Some classic greek statues were equipped with gold or bronze accessories. I like the idea of Cookie Monster immortalized with a bronze cookie instead of gold. Not because I was out of gold paint but had some bronze kicking around. So after a few coats and mad wipe downs after some sloppy brush work his cookie and crumbs were glinting in the spring sun! 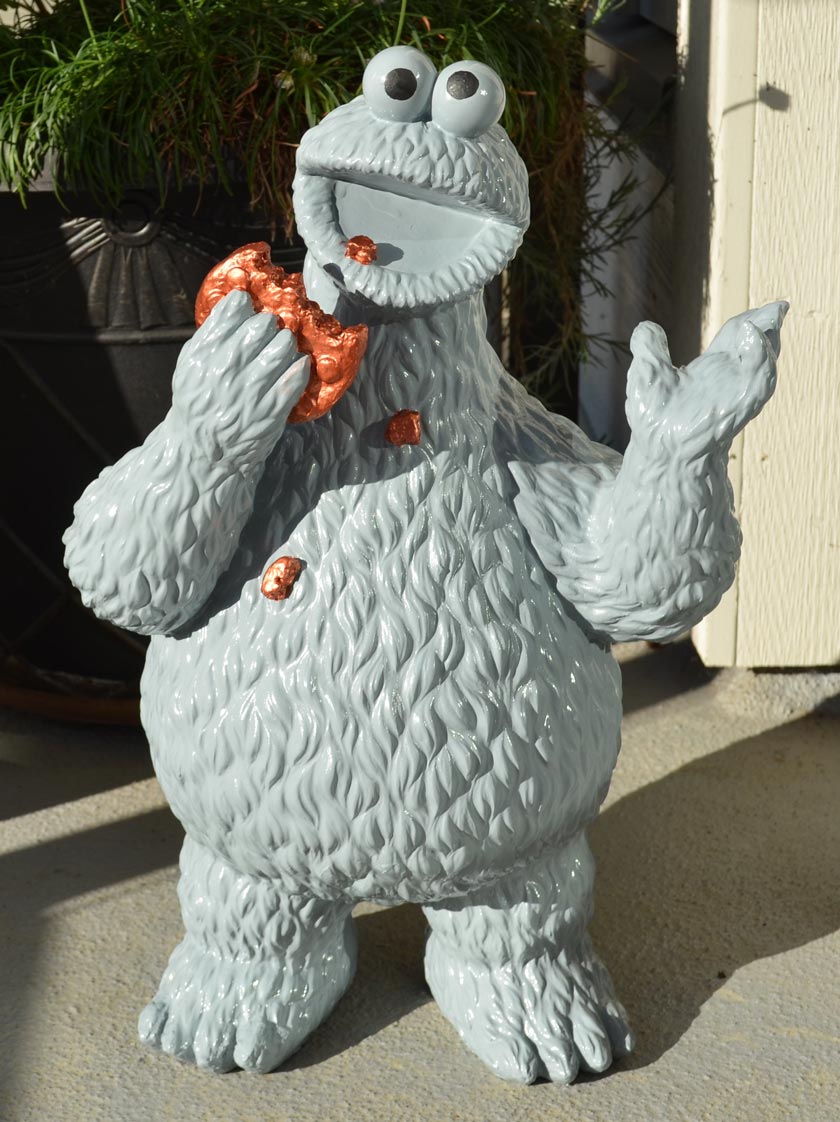 I was originally planning on stopping there, but something wasn’t quite right. Cookie Monster without pupils was merely two spheres atop a furry head. I had a thought that I could carve the pupils into the plaster, but given the fragility of hollow plaster and the hairline cracks I found on poor Cookie, I didn’t want to risk it. So a quick bit of black acrylic paint to the two spheres along a small guide that must have led the original painter gave the statue the soul he deserves.

Now that he’s done, my only debate is whether to hold on to him or wait until my Dad is out and sneak the new and classier Cookie Monster back into his yard to hold court at the edge of the koi pond. What do you think?