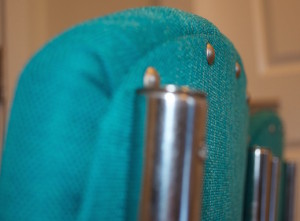 Last summer while away in a small town near the Okanagan in BC, we were pleased to see that there was a neighbourhood garage sale. As DIY’ers will know, there’s something thrilling about poking around other people’s unwanted treasures. I showed great restraint when I saw a pair of mid-century kitchen chairs in need of some love. When they were still there at the end of the day, and I was still eyeing them, Scott finally said, “Go ahead!” My in-laws agreed I could store the chairs at their place until I was ready to work on them.

People will often ask how long it takes to do particular projects. This one was probably around the 20 hour mark, although it was spread over several weeks.

I began by examining the chairs first. I made diagrams and notes of the appearance. I then carefully took the chairs apart. It’s always fascinating to see what’s underneath the top layer. In this case, it looked like the chairs had been reupholstered once before, as underneath the bright red was a layer of burgundy. The chairs weren’t properly finished underneath – it was simply the wood of the chair, but that was an easy fix.

I took off all the old fabric and padding, and then used some steel wool and vinegar to gently clean the chrome, removing the rust and old paint that had been splashed on the chairs. I then got some Brasso and used that to polish up the chrome as much as possible. It wasn’t possible to get rid of sixty plus years of wear and tear completely, but they came out looking pretty nice!

I measured the base and backs of the chair, then plotted the measurements on graph paper to make sure I made the most economical choice when determining the length of fabric. (Fabric is often sold in 54” width, so I plan my layouts with that width in mind.) I made a trip to the local fabric store, wanting to bring some new life and colour into the chairs. I found some beautiful, sturdy teal fabric in the outdoors section. I already had polyester padding leftover from another reupholstery project as well as decorative tacks for the back, so I was all set!

I cut out a double layer of polyester padding by placing the wood on top of it and tracing around the shape, leaving an extra two inches around all sides (so that it could fold back over the wood). I traced the back plate of the backrest on paper to use later as a stencil when cutting the back plate out of millboard.

I stapled the padding to the chair backs and seats using an air compressor and pneumatic stapler. I love both. It makes stapling on wood projects so much easier!

I then cut out the fabric after marking with chalk the sizes of pieces I would need.

Next, I stapled the fabric around the padded wood frames.

To finish off the bottoms, I cut out the dust sheets using double thickness so it would hide the wood completely. I stapled those to the bottom of the chair, folding the edges in to create a neat edge.

Using the stencil I had created from the chair back, I cut this shape out of millboard. (Millboard can be found at art stores. I got mine from Opus Art Supplies.) I had to readjust the size, taking off about a ¼ inch, as I didn’t want the back piece to take up the whole back of the chair.

I aligned the fabric over the backrest backboard pieces and secured it with glue.

I then hammered the backboard pieces into the backs using decorative tacks and carefully measuring between the tacks so as to have a uniform pattern.

Finally, I screwed the bottom pieces into the chair legs and the back rest into the chair frame. This was a careful process to make sure the backrests were at a comfortable height as well as making sure they were even and in line with the backrest of the other chair.

These mid century chairs have now been brought forward into the 21st century. We both really like them but simply don’t have the space for them in our condo. This will be the first pieces of ours that we try and sell. Anyone need some kitchen chairs?